Saakini Daakini Movie Review: It is extremely unusual for Telugu films to contain two female protagonists, yet it seems intriguing. Saakini Daakinin, starring Nivetha Thomas and Regina Cassandra, is an exact adaptation of the Korean film Midnight Runners. Because the trailer for Saakini Daakini was so effective at generating interest, the film was released on September 16, 2022. Check out my detailed analysis to see if this movie is worth your time. 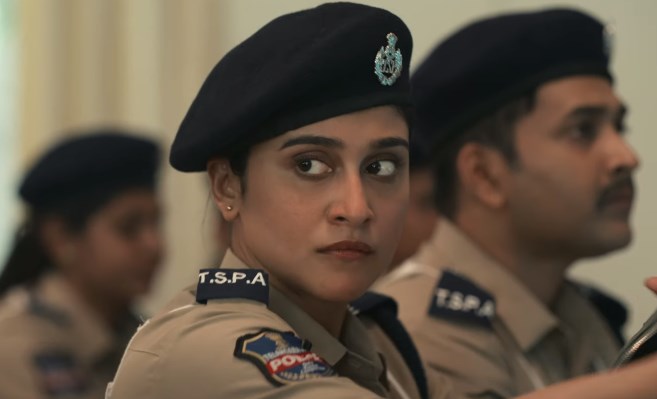 Shalini (Nivetha Thomas) and Dhamini (Regina Cassandra), who are from different backgrounds and meet at a police training camp, witness a kidnapping at midnight to kick off the plot. Shalini and Dhamini’s efforts to solve the abduction case comprise the remainder of the narrative. Unfortunately, they must rehearse in the same room while frequently engaging in conflict.

The ensemble cast of Saakini Daakini is led by Nivetha Thomas and Regina Cassandra, with supporting performances by Mirchi Hemanth and Vennela Kishore. Sudheer Varma helms the film, which is produced by D Suresh Babu, Sunitha Tati, and Hyunwoo Thomas Kim. Both Mikey Mc Cleary and Naresh Kumaran contributed to the composition of the song. Richard Prasad has been assigned photographic tasks.

The creators of Saakini Daakini were successful in adapting Midnight Runners to the sensibilities of the Telugu audience, resulting in an accurate adaptation. Despite what may appear to be a shallow plot, the film has everything it needs to keep moviegoers interested from the opening credits to the end. Only until the plot transfers to the school for further development does the film’s quality increase. The film’s first act is humorous due to the chemistry between Nivetha and Regina.

The kidnapping raises the stakes in the second act, and Nivetha and Regina’s efforts to solve the case keep the audience interested until the very end. However, the emotional tale fell flat.

Both Nivetha and Regina are recognized, veteran actresses with distinctive styles. Despite never having played the role of Shalini before, Nivetha’s Telangana accent proves to be a fantastic asset in this film. The film focuses on Regina’s character Dhamini, whose backstory provides much of the emotional tension; the rest of the cast, especially Vennela Kishore, also offers great performances.

Sudheer Varma’s debut film left an effect. Super Over, starring Naveen Chandra, marked the return of crime drama master and producer Swamy Ra Ra with Naveen Chandra in the lead role. Even though we went to see this picture primarily for the comedy, he did an excellent job with the remake.

Good training scenes in Saakini Daakini fell short technically, despite Richard Prasad’s experience in night sequences. Mikey McCleary & Naresh Kumaran’s songs did not register at all, but their background soundtrack is impressive.

Lastly, the comedy Saakini Daakini is recommended for viewing.